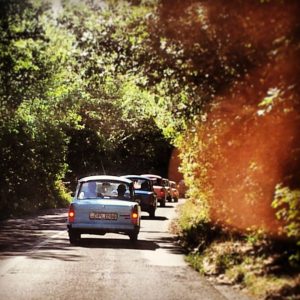 This event is really nostalgic for me, and a lot of fun for everyone involved. A Trabant is a big thing in Hungary, and I remember being taken to school in one every morning for years. They are as old as old-timers can get, and, the whole group agreed, are a special experience to drive.

Let me tell you about how I liked it.

First of all, what the hell is a Trabant? It is a car from the 70’s, manufactured in East Germany, and later imported to Hungary, with what can only be described as roaring success.

They are ***** ugly. And also endearing at the same time. When the stag group I accompanied first saw them they broke out in laugher and asked where you wind up the spring. They couldn’t wait to get in them and drive, even when we explained that the gear-shifter is built into the side of the steering wheel. It did take some time to get a hang of it, but soon enough we were on our way out of Budapest, to Dobogókő.

The trip took an hour and a half and we were laughing our asses off the whole way there. Trabant has a very specific and one of a kind sound, and we took turns imitating it in the car I was in (there are two people in one car). We heard the other screaming out the window behind us. It was easy to hear because a Trabant is not particularly fast or furious.

We drove up a huge serpentine, and you really have to manage what little power the Trabants have.

Once we arrived we got ready for the lunch that was included in the trip. It was a real, authentic, home-made (we were on a mountain, home-made is kind of the default) three course Hungarian meal, which, I have to say as someone who has tried every single Hungarian dish several times, was simply excellent.

The beverages were non-alcoholic of course, and no we didn’t drink non-alcoholic beer, for fear of angering the beer-gods and not being able to get back down.

The route back was different from the one we took there, and even though I live here, the countryside always amazes me. The day was clear, the weather was chilly but nice, and we were tearing (again, relative to a Trabant) through the countryside in a Trabant. We drove on right back to the hotel, but were not ready to leave the cars.

This activity is highly recommended to car fanatics, nostalgics and fans of history, and everyone who wants to see what Hungary has to offer outside of Budapest.

Go ahead and check it out for yourself!